The Evolution of the Automotive Battery 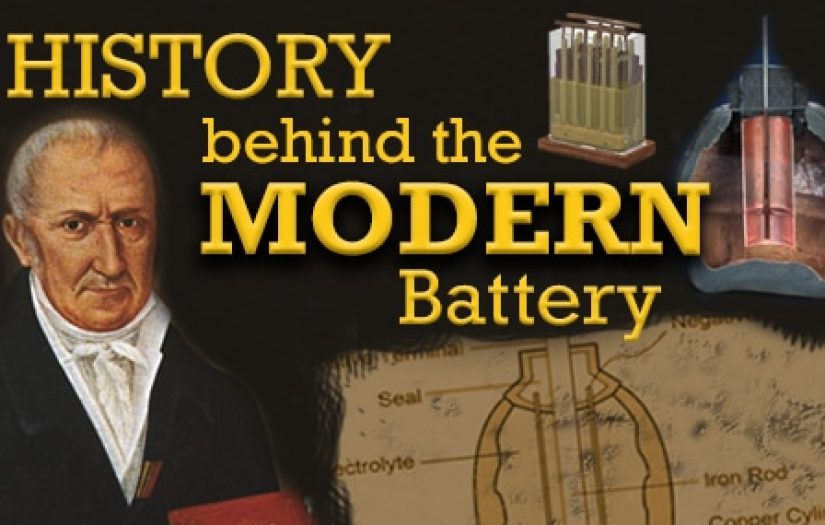 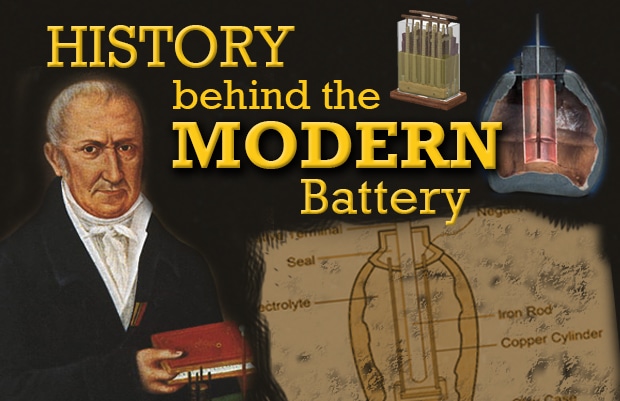 One of the components of the modern vehicle that has seen dramatic change in the last two decades is the automotive battery. At Clore, we often say that the vehicle battery has changed more in the last 12 years than the prior 60 years. With that in mind, we thought this was a good time to look back at the history of the automotive battery as well as cast about for expert opinions on where batteries are headed in the next 20 years.

Some scientists believe that evidence has been found supporting the theory that a battery-like device was used by the ancient Parthians, who ruled the area of what is now Baghdad in 200 BC. While digging railway lines in the 1930s in Baghdad, workers found 13cm long clay jars which, upon detailed inspection, appeared to resemble batteries. They were complete with a positive terminal (an iron rod) and a negative terminal (a copper cylinder) and it is believed that a vinegar-like solution was used as the electrolyte that allowed the chemical reaction necessary for battery operation. Not all experts agree that these clay pot devices were, in fact, batteries, nor is there consensus on what they would have been used for. That said, modern replicas have shown the ability to generate between 0.8V-2.0V with each pot. So, batteries may have had their start as long as 2000+ years ago.

While there were small steps taken in battery progress in the early 1700s, the next major moment in the evolution of the battery came with Alessandro Volta, who in 1800 made several key discoveries that spurred progress on battery development. First, he identified that certain liquids generated a continuous flow of electrical power when used as a conductor. He also figured out that different metals acquire and release electrons at different rates (voltage potential). Finally, he discovered that he could increase total voltage by stacking his cells on top of one another.

These and other discoveries spurred further invention, culminating in the design of the first mass production battery by William Cruickshank in 1802. Cruickshank arranged zinc and copper plates in a sealed wooden box and immersed them in an electrolyte of brine. His and other batteries evolved over the ensuing years, but they all shared a common dilemma: they were all single use batteries, unable to be recharged.

In 1859, a French physicist named Gaston Planté solved the single use dilemma by developing the first lead-acid battery, generally the same concept used for most of today’s vehicle starting batteries. Planté’s design utilized an anode (negative electrode) made of lead and a cathode (positive electrode) made of lead dioxide. His was the first battery to use a single electrolyte for both electrodes. But his big breakthrough was the fact that his design allowed the battery to be recharged by reversing the natural chemical reaction. While his design had some deficiencies, such as its short power delivery duration, it marked a major step in battery evolution and is the clear precursor to today’s automotive batteries. In 1881, Camille Alphonse Faure, a French chemical engineer, improved upon Planté’s concept by creating a better structure for the battery. Unlike Planté’s spiral design, Faure developed a lead grid lattice into which a lead oxide paste was pressed, forming a plate. This design enabled multiple plates to be combined for great power potential and was much easier to mass produce.

An Essential Component in Vehicle Design

Although significant progress was made in battery design from Planté’s original designs in 1859 to the turn of the century, lead-acid batteries were not utilized in early vehicle systems. This was because most of those vehicles had no electrical demand while in operation and were started using some form of mechanical process, such as a crank system. As a result, there was no pressing need for the ability to store electrical capacity in those vehicles.

The electric starter was the development that changed the landscape and drove the need for stored electrical capacity in the vehicle. The first vehicle equipped with an electric starter in the US was the 1912 Cadillac. The self-starter was developed by Henry M. Leland and Charles Kettering at Cadillac, later purchased by General Motors. Leland pushed Kettering to design an alternative to crank starting systems after another Cadillac engineer was hit in the head and killed by a starting crank when its engine backfired.

In the mid-teens, there were many starting mechanisms employed by automobiles, but, by 1920, most new vehicles were equipped with electric starters. This change quickly increased the need for a reliable power supply within the vehicle architecture, making the lead-acid battery an essential component of the automotive industry. In 1918, the Hudson Motor Car Company was the first to utilize a standard battery size as per BCI (Battery Council International) specifications. BCI battery group sizes are still used today (Group 24, Group 27, etc.).

During this period and into the 1950s, vehicle starting batteries and electrical systems were 6V systems. A major shift occurred in the 1950s, as larger cars and larger engines necessitated the greater power provided by 12V batteries and systems. We would suggest that this was last major change to battery/vehicle system design prior to the end of the 20th century.

That said, there were advancements during this period.  A major step for vehicle owner convenience was the introduction in 1971 of the Delco-Remy Freedom Battery, the first maintenance-free lead acid battery used in an automotive application. The 1970s also saw the emergence of VRLA AGM batteries, though these were largely confined to specialty applications until recent years.

As can be seen by the parallel evolution of battery technology and vehicle design, developments in one often drive the need for opportunity to change in the other. The modern era is no different. As vehicle electrical demand increased in the 1990s and 2000s, driven by both an increase in in-cabin conveniences and an ever-growing electrical system, it was clear that the traditional lead acid battery was reaching its limit in terms of meeting system needs. This drove the need for new constructions and new chemistries.

One major response to the changing power needs of today’s vehicles has been the adoption of AGM batteries. AGM (Absorbed Glass Mat) batteries began to be used in military applications in the mid-1980s. These Valve Regulated Lead Acid (VRLA) batteries bring many benefits to vehicle system design. First, they typically have much lower internal resistance than traditional flooded batteries, meaning that they will heat up less in the typical charging/discharging cycle, which improves longevity. In addition, AGM batteries can be more deeply discharged than traditional flooded batteries. This is a critical benefit, since the increased electrical demands of modern vehicles mean that the battery must meet peak loads when alternator output is maxed out. Finally, AGM batteries, due to their construction, are more vibration resistant than traditional flooded batteries and, because they are sealed and spill-free, can be stored and operated in any orientation.

A major systems evolution that is driving the popularity of AGM batteries is the adoption of Start-Stop engine systems, which shut the engine down when the vehicle comes to a complete stop and immediately starts it back up when the driver’s foot is taken off the brake. These systems, which enable manufacturers to improve fuel efficiency, are typically deployed using one or more AGM batteries. The batteries found in such systems can be standard AGM batteries, specialty Start-Stop AGM batteries or a combination of the two. Other battery types are expected to be incorporated into these systems in the coming model years, but currently, AGM batteries are the dominant construction being used.

Several OE manufacturers have begun to incorporate Lithium batteries into traditional designs as starting batteries (Porsche is a good example) as well as components within Start-Stop systems. Lithium battery chemistries are very energy dense, deliver high amounts of power (either starting power or reserve power) in a small, lightweight package. The dominant starting battery lithium chemistry is LiFePO4 (Lithium Iron Phosphate). This chemistry delivers a high power density without the volatility of other lithium chemistries, making it a suitable replacement battery for many applications or vehicles where lead-acid batteries are installed.

The development of hybrids, plug-in hybrids and EVs created a demand for much greater battery power, but the weight of lead-acid solutions made them impractical for these applications. To meet the power/weight challenge, early hybrids predominantly used NiMH (nickel-metal hydride) batteries to solve this problem. As an example, the 2010 Toyota Prius incorporated a 1.31 kWh NiMH battery pack.

The same need to increase power without added weight that drove the shift from lead acid to NiMH also caused a shift from NiMH to Li-ion battery packs. In addition, Li-ion batteries can be more deeply discharged than NiMH batteries, meaning that more of the battery can be used during each discharge cycle – in traditional terms, this is like being able to drive your gas-powered car until it reaches ¼ tank vs. ½ tank before needing to refill. Using the Prius as an example, the 2016 Prius uses a 207V, .75 kWh Li-ion battery pack weighing just 54 lbs. vs the old 202V, 1.31 kWh NiMH battery pack weighing 89 lbs.

It is reasonable to expect that Li-ion batteries will soon reach their limit in terms of power delivery within a reasonable weight range. Many new battery chemistries, as well as competing technologies such as hydrogen fuel cells, are vying to become the next preferred power source for electric vehicles. As we have seen over the past 15 years, changing system needs and the constant drive for improved performance create opportunities for new technologies. Because the rate change is increasing, it may surprise us in 2030 to see what is powering passenger vehicles.

PrevPreviousManaging the Nissan Leaf Battery
NextThe Generosity of Our CustomersNext