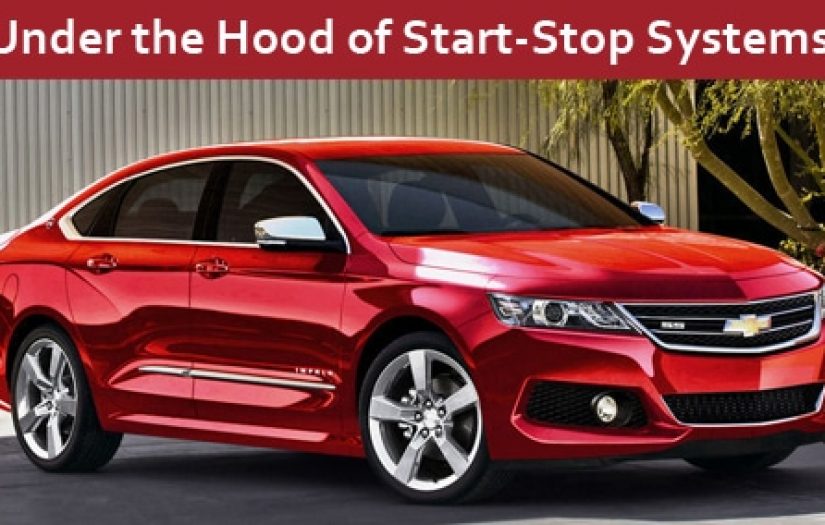 We first addressed Start-Stop Systems two years ago, as they began to appear in the North American vehicle market. Much has happened since then, when these systems were found primarily in hybrid and luxury vehicles. With Start-Stop available as an option on the Ford Fusion and Dodge Ram pickup and standard equipment on some 2014 Chevy Malibu, 2015 Chevrolet Impala and 2015 Ford F-150 models, this technology is about to become commonplace.

Auto manufactures are under pressure to find ways to improve fuel economy to meet increasing fuel efficiency (CAFE) standards as agreed to with the US Federal government and formalized in standards adopted by NHTSA and the EPA. These standards call for fuel efficiency improvements over the next several years, with a goal of reaching an equivalent of 54.5 mpg for all cars and light trucks by 2025. Start-Stop systems are one of the many technologies auto manufacturers are deploying in their efforts to meet these standards.

A recently released study by AAA suggests that these systems are proving effective in improving fuel efficiency. “Test results indicated that automatic stop-start systems provide a five percent to seven percent improvement in fuel economy and reduction in carbon dioxide emissions compared with tests conducted on the same vehicle with the automatic stop-start system disabled.” 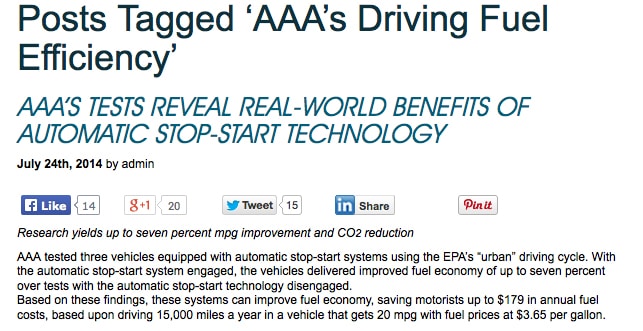 Widespread adoption of this technology is expected over the next few years. Navigant Research projects that sales of Start-Stop equipped vehicle sales will grow from an estimated 500,000 vehicles in the US in 2013 to over 7 million vehicles by 2022. Worldwide, they expect these systems to be employed in over 55 million vehicles by 2022, accounting for over half of all light vehicles sold globally.

So, what do these new systems look like, from a service perspective?

Using the Start-Stop equipped 2015 Impala as an example, it will deploy two batteries to meet its electrical demands: a larger, 12 Volt AGM primary battery and a small, auxiliary 12 Volt AGM battery, which powers electric accessories during an Auto Stop event. A dual-battery isolation module ensures that both batteries are properly charged and that the primary battery always has sufficient charge to start the vehicle.

In many 2-battery systems, the auxiliary battery will be located away from the engine compartment, such as in the trunk or under a rear seat. On the 2014 Start-Stop equipped Malibu, it is located in the trunk. When servicing these vehicles, it will be critical to test both batteries for condition/state of health.

Our research indicates that, to date, the most popular battery type deployed in these systems is the AGM battery. Manufacturers are expected to use Enhanced Flooded batteries (EFB) in these systems as well, though they are projected to be used in lower cost vehicles, as they are less expensive to manufacture.

It will be increasingly important for shops to have the tools needed to service the batteries found in these systems as they gain in popularity. It is critical to have battery charging equipment that can properly service the AGM and Enhanced Flooded batteries that are expected to be the dominant battery types found in these systems. AGM batteries, in particular, require a specific charging routine with precise control of all charging parameters. These batteries can be damaged if charged using an incompatible battery charger. 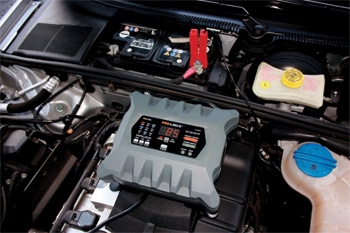 In addition, shops will need the equipment to properly assess battery condition for the various battery types encountered in these systems. As with charging, each battery type reacts differently to the testing process and it is very important to have testing equipment that is optimized to handle each specific battery type you expect to encounter. For instance, our flagship digital tester (Model BA327) will get a facelift later this year which will incorporate not only cosmetic changes but add new Start-Stop batteries to its menu of testable battery types.

As auto manufacturers add this technology to an increasing array of models, shops will need to be prepared to service Start-Stop systems in all their variations. Whether it is variation as related to system design (one battery systems vs. two battery systems) or as related to battery type (AGM, EFB, others), it will be important for shops to identify the most common deployments and equip themselves with the tools to diagnose, service and repair system components, particularly the batteries in these systems.